The Granite Reef Underground Storage Project (GRUSP), one of Arizona's largest water-banking facilities and one of the biggest recharge projects of its kind in the nation, is back in operation this month after more than a year of being offline. GRUSP will continue its record-setting pace for water stored for future use in the Phoenix metropolitan area.

GRUSP, located near Mesa in the Salt River bed about four miles downstream of Granite Reef Diversion Dam, was offline for about a year due to the delivery channel being washed out by flooding from last year’s storms. The delivery channel has been reconstructed and recharge will resume at GRUSP this month.

Developed through a successful partnership made up of the Salt River Project and Valley municipalities Chandler, Gilbert, Mesa, Phoenix, Scottsdale and Tempe, GRUSP is operated and maintained by SRP and owned by those six municipalities and SRP.

The water storage project, along with the New River Agua Fria Underground Storage Project (NAUSP) in the West Valley, has become an instrumental component of Salt River Project’s water resource management tool kit and a real-life, working example of how SRP and Arizona have been preparing for drought. 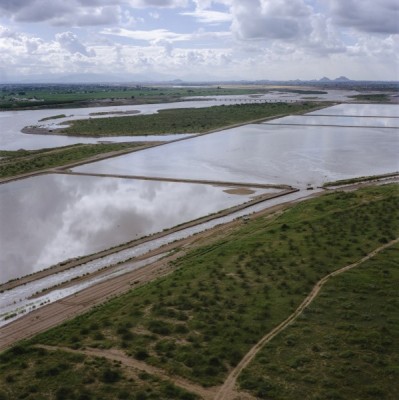 Through artificial groundwater recharge, water is retained in large, porous recharge basins and allowed to seep into the natural underground aquifer below. An aquifer is made up of porous material that is able to store and transmit groundwater, consisting of gravel, sand, silt and clay and varying in thickness from a few hundred feet to a few thousand feet. Water is stored in the aquifer and withdrawn by well-pumping when needed.

Since its completion in 1994, the environmentally and economically friendly GRUSP facility has recharged over 1 million acre-feet of Central Arizona Project (CAP), SRP water, and effluent or about the equivalent of 17 Saguaro Lakes, while also enabling Arizona to maximize use of its Colorado River entitlement.

The main purpose for storing water at GRUSP is for use during prolonged drought periods or when a shortage is declared on the Colorado River system, which is expected in 2022. This water, nearly half of which is stored on behalf of the Arizona Water Banking Authority (AWBA), would then be available to be pumped out of the ground and delivered to Valley residents and businesses.

SRP, on behalf of the GRUSP owners, also works closely with the Central Arizona Water Conservation District (CAWCD) --- which operates the CAP canal --- in coordinating CAP water deliveries to GRUSP, and with the Arizona Department of Water Resources (ADWR).

GRUSP today remains one of the largest water-banking facilities in Arizona and in the West. And, thanks to the collaborative work by SRP and other organizations, including the Salt River Pima-Maricopa Indian Community and the U.S. Bureau of Indian Affairs, a new land-lease agreement signed in late 2013 will extend the life of the project until 2033.