SRP to more than Double its Utility Scale Solar to 2,025 Megawatts by 2025

Salt River Project today announced plans to more than double its 2025 utility-scale solar commitment to now add a total of 2,025 megawatts (MW) of new utility-scale solar energy to its power system by the end of fiscal year 2025, driven in part by dedicated customer demand for new renewables. This is more than 1,000MW beyond SRP’s original 2025 commitment of 1,000MW, announced in November 2018. As part of this 1,025MW solar increase, 450MW is enabled by an SRP commercial customer to meet its renewable energy commitments. All the renewable energy purchased is expected to be from solar energy developments built in Arizona or on the Navajo Nation and will ultimately be used by SRP commercial and residential customers. 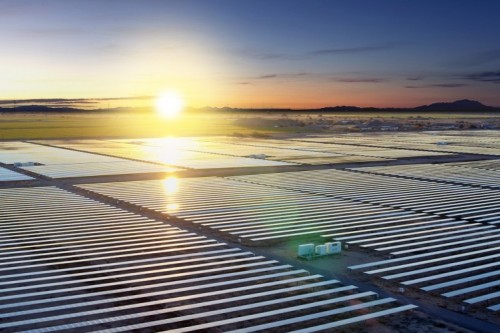 “As we plan for our customers’ increasing need for energy and their desire for a cleaner environment, solar energy is a key solution that is significantly growing our sustainable generation portfolio,” said SRP’s CEO and General Manager Mike Hummel. “Doubling solar purchases over the next four years supports our shared goals with our customers to be as proactive as possible to reduce our collective carbon footprint while maintaining our reliability and affordability.”

“Being a sustainability leader means reaching for new goals and with that we must be willing to tackle new challenges and risks,” said SRP President David Rousseau. “With utility-scale solar, SRP is moving quickly to bring new resources online and simultaneously working with partners across the nation and world on research and development efforts in storage technology that will advance this renewable energy, making it a long-term, practical solution for all.”

SRP recently contracted for the output from the Sonoran Energy Center, which will be the largest solar-charged battery project in the state, giving SRP one of the largest commitments to energy storage in the nation. The utility has also contracted for an additional large-scale solar and battery storage project at Pinal Central Solar Energy Center and is bringing online a new grid-charged battery storage project at Agua Fria Generating Station. In the past year, SRP announced it was the first Arizona utility to join the Low-Carbon Resources Initiative (LCRI), an international initiative jointly led by the Electric Power Research Institute (EPRI) and the Gas Technology Institute (GTI) to accelerate low-carbon energy technologies. Along with partners involved in the LCRI, SRP is able to advance new ideas, research and solutions to electrify the global economy with clean energy in cost-effective ways.

The addition of 2,025MW of solar energy is expected to reduce carbon dioxide emissions by more than 10.4 million tons – the equivalent produced by more than 2 million passenger cars driven in a year. SRP is examining programs to allocate the new solar capacity to various customer groups, including community solar for residential customers.

SRP’s latest solar field developments which came online in December 2020 include the 100MW East Line Solar and the 100MW Saint Solar. The two utility-scale solar fields serve commercial, municipal and educational customers who chose to participate in SRP’s Sustainable Energy Offering, and have the ability to lower overall carbon emissions by receiving a portion of their energy from the sun. East Line Solar was built by developer sPower and is located in the town of Coolidge in Pinal County, Ariz., and solely serves Intel Corporation with 100MW of renewable solar energy. Saint Solar was built by developer NextEra and is also located in Coolidge, Ariz., and customers currently receiving a portion of the 100MW of renewable energy from this solar plant include Air Products, Albertsons Companies, Inc., City of Chandler, City of Mesa, City of Phoenix, CMC Steel Arizona, CyrusOne, Digital Realty, Freeport-McMoRan, Mesa Public Schools and Walmart.

“We are already experiencing tremendous response from customers we work with to provide renewable energy,” said Hummel. “We are thrilled to see what an additional 1,025MW of renewable energy will bring our customers who understand the value associated with using clean energy to power their facilities and significantly reduce carbon emissions across operations.”

SRP is already in the process of procuring the additional 1,025MW of solar capacity from solar developers interested in building new generation resources in Arizona.

“We are proud to be able to honor our commitment to customers by adding new clean energy resources in Arizona to meet our shared sustainability goals,” said Rousseau. “We are excited to see what ripple effect this will have in propelling sustainable goals and carbon-reducing measures across our community and state.”

SRP to more than Double its Utility Scale Solar to 2,025 Megawatts by 2025