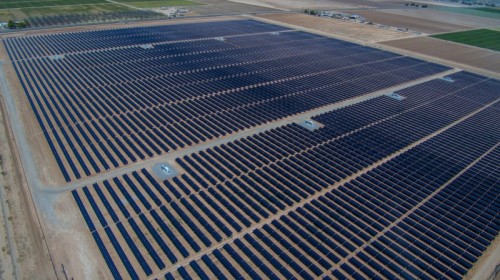 Salt River Project today announced plans to add 1,000 megawatts (MW) of new utility-scale solar energy to its system by the end of fiscal year 2025. The plan will accelerate both the pace and total capacity of SRP’s current solar energy resource plans by 700 MW compared to current resource plans during the same timeframe.

This proposal represents a growing commitment to sustainability that is both reliable and affordable,” said SRP’s CEO and General Manager Mike Hummel. “It focuses on investments in utility-scale solar projects that have higher solar capture efficiencies and therefore provide optimal value for our customers.”

According to Hummel, the costs for solar energy continue to decrease – making this the right time to increase investments. In addition, a recent study has determined that SRP’s grid is prepared to reliably handle the addition of 1,000 MW of solar power.

“Over the past several months, we have had discussions with residential customers and many of our larger commercial, industrial and municipal customers regarding their needs for sustainable resources. Several customers have asked us to work with them on providing resource options that help them achieve their goals,” said Hummel. “This proposal is a foundational part of providing programs that bring increased value to our customers while partnering with them to achieve mutually desired renewable energy goals.”

SRP will add approximately 200 MW of new solar annually through 2025, which will allow for careful analysis of the impact to the reliability of SRP’s electrical grid and provide valuable operational experience.

“We are continually working toward a more sustainable future as well as reducing our carbon footprint for the benefit of SRP’s customers and the communities we serve,” said SRP President David Rousseau. “This plan affirms our commitment in a manner that brings the most value to our customers while providing the greatest environmental impact.”

SRP will examine programs to allocate the new solar capacity to various customer groups, including community solar for residential customers.

The addition of 1,000 MW of solar energy is expected to reduce SRP’s carbon dioxide emissions by about 5.2 million tons – the equivalent produced by more than 1 million passenger cars driven in a year.

According to Hummel, SRP will focus on strategic locations for the new solar capacity that will provide maximum efficiencies and reliability benefits while best meeting customer growth.