SRP engineers are in the process of finishing a project to replace the original turbine shut-off valves at Horse Mesa Dam at Apache Lake. The original valves, which were 10.5 feet tall and weighed about 27,000 pounds each, were installed in 1927 and had reached the end of their useful life for the three hydro generating units.

Built in the early 1920s, the dam successfully serves SRP as part of a series of dams storing water on the Salt River, releasing the water downstream when needed and providing electricity to the Valley with its hydro generating units.

Turbine shut-off valves control and stop the water flow from the lake to the turbines. This occurs each time the unit is started, often several times 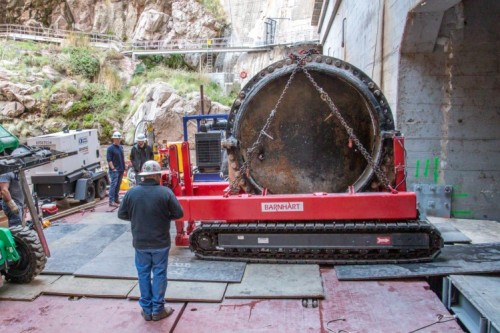 a day. The valves also act as protective devices that prevent damage to the turbines in the event of a malfunction.

“Replacing the turbine shut-off valves restores a safe and reliable means to maintain our units,” said Matt Pendergraft, Manager of O&M Baseload and Gas Generation. “It’s critical we ensure safety for our employees and our customers.”

One of the biggest challenges during the project was removing the old valves. Because the original control house was built around the valves, crews had to cut through the power house walls to reach them.

“The original construction crew didn’t anticipate having to eventually replace them. Luckily for us, they built things that lasted, so we didn’t have to do this for nearly 100 years,” he said.

The original valves were cut out of the penstock after the concrete was removed and sent by barge 11 miles downriver. The new valves, which are 8 feet tall and weigh about 47,000 pounds each, were brought in from Germany and transported upriver.

When a major rainstorm hit the lower Salt River in September, it set the project back weeks as roads were washed out and flooded. The barge, which was holding the new valves and trying to access the dam, could not move past a large amount of debris. Crews had to use an excavator to remove the debris from the reservoir. Overall, they removed about 100 dump trucks full of logs and debris to gain access to the dam.

“The most challenging part of the project was dealing with Mother Nature,” said Pendergraft.

The project is expected to be completed in mid-June.