Water Releases through Valley to End this Weekend

SRP Storage System at 77% of Capacity with Productive Runoff Season 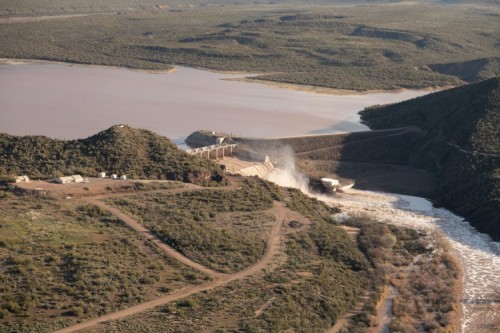 Salt River Project this weekend will stop releasing excess water from the two reservoirs on the Verde River with snowmelt runoff conditions diminishing on the Verde and the prospect of additional significant storms lessening considerably.

SRP’s six reservoirs on the Salt and Verde rivers have received about 900,000 acre-feet of runoff from snowmelt and precipitation on the 13,000-square-mile watershed since the start of the 2019 runoff season on Jan. 1, said Charlie Ester, manager of Surface Water Resources.

“Most of the snow on the Salt and Verde watersheds has now melted with temperatures on the rise, and we are expecting that the final runoff season number will come in at more than 1.17 million acre-feet by May 31, the end of our runoff season,” Ester said.

“That would make this winter the most productive since 2017 runoff season, when runoff was just under 1 million acre-feet. This is great news, of course, because the 2018 runoff season was the lowest on record when we received only about 100,000 acre-feet with virtually no snow over those five months. With all the snow and runoff this year, we’ve now had two well-above-normal winters in the last three years.”

Since SRP began low-level water releases on Feb. 28, nearly 100,000 acre-feet of Verde River water has been spilled at Granite Reef Diversion Dam into the into the normally dry Salt River through the Valley – about the same as in 2017. Most of that water released into the Salt through the Phoenix metropolitan area has helped recharged the aquifer, Ester said.

The SRP releases from Horseshoe and Bartlett reservoirs on the Verde River, which peaked at about 7,000 cubic feet per second at Granite Reef Dam on March 3, were initiated in late February to create additional storage capacity and provide maximum flexibility for snowmelt and the likelihood of future runoff events in the spring.

The combined Salt and Verde system today is at 77 percent of capacity, up from 60 percent one year ago. While the two smaller Verde River reservoirs have been at near-capacity since late February, there is still significantly more storage available on the Salt River, which today is a combined 74 percent full.

Ester said no water was released from the Salt River this winter because of the much larger available capacity at Theodore Roosevelt Lake, which holds about two-thirds of the water SRP stores. Roosevelt has risen to about 70 percent – up from 39 percent on Dec. 15 -- and will continue to climb with considerable available space to contain expected seasonal runoff through the end of May. That’s an increase of about 480,000 acre-feet since mid-December, said Ester, who predicts Roosevelt Lake could reach 80 percent of capacity this spring.

Before the warming temperatures began depleting the snowmelt on the watershed, Ester said the Verde River snowpack peaked at 137 percent of normal while the Salt River snowpack reached 120 percent – the deepest it’s been in nearly two decades -- according to measurements taken recently by SRP hydrologists who regularly check the snow levels in Arizona’s high country to develop seasonal runoff forecasts and provide valuable data for flood-control planning.

SRP this weekend will stop releasing excess water from both Verde River reservoirs with snowmelt runoff conditions diminishing and the prospect of additional major storms lessening. About 900,000 acre-feet of runoff has been captured so far this year.