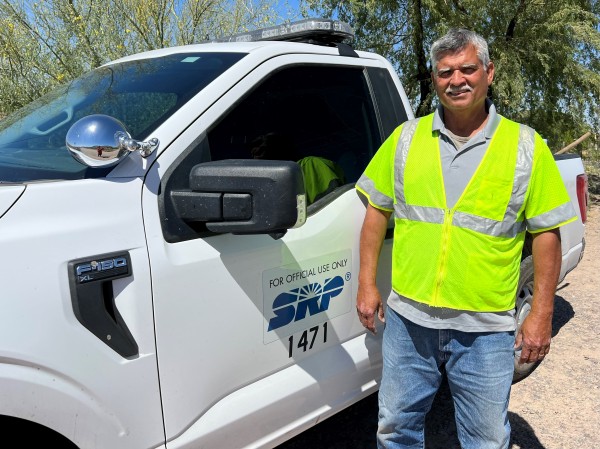 The dogs were devoted to each other. The white dog wasn’t gonna leave until his buddy was ok. It felt good to help them. Every life is important. When someone or something needs help, you help.

WHAT:
SRP’s 131-mile system of canals are designed to efficiently deliver water to a large portion of the Valley. Every day, employees from Salt River Project’s water delivery team tend to and care for the water supply, but last Thursday morning SRP Zanjero Ruben Cecena took 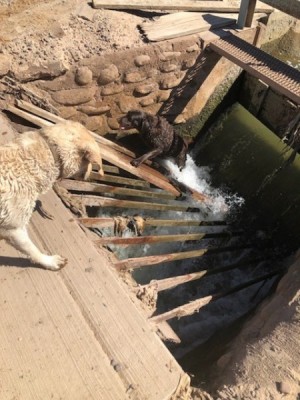 great care of two Labradors stranded in the water.

As Cecena approached a lateral grate at 27th Avenue and Elliot Road in Laveen to clear debris from the grate to allow for water flow, he saw two large dogs stuck and in distress as a heavy flow of water rushed around the animals.

Cecena quickly retrieved his gancho, which is a tool used to pull out trash or items causing blockage in the canal. Cecena hooked one of the dogs by its collars and pulled the 70-pound animal to safety.

He then attempted to hook the second dog by its collar with his gancho, but the collar slid off the dog’s neck. The 41-year SRP veteran then grabbed about five wooden boards from the back of his Zanjero truck, laid the wood across the grate in hopes that the dog could climb out. Unfortunately, the dog was too exhausted from the struggle in the water, so Cecena used the flat part of his gancho to give the animal a push from behind and get it to safety.

Once the first dog saw that his friend was ok, both animals scurried off together towards a nearby farm field and were not seen again. Cecena said both dogs were wearing collars and he assumes their owners live in the area.

“The dogs were devoted to each other. The white dog wasn’t gonna leave until his buddy was ok,” said 62-year-old Cecena. “It felt good to help them. Every life is important. When someone or something needs help, you help.”

SRP zanjeros say they routinely come across animals as they deliver water throughout the Valley. They remind owners to always keep an eye on their pets around canal and irrigation facilities.

DETAILS:
SRP reminds those who walk, jog or bike along the canals to be safe. Canals can be very dangerous. Here are some safety reminders:

SRP is a community-based, not-for-profit public power utility and the largest provider of electricity in the greater Phoenix metropolitan area, serving more than 1 million customers. SRP is also the metropolitan area’s largest supplier of water, delivering about 750,000 acre-feet annually to municipal, urban and agricultural water users.