Officials with the Navajo Tribal Utility Authority (NTUA), Salt River Project (SRP) and Navajo Nation leaders are celebrating the opening of the second phase of the Kayenta Solar generation facility, a renewable energy plant that provides power to the Navajo Nation.

NTUA and its wholly-owned subsidiary NTUA Generation, Inc., expanded the Kayenta Solar facility to include Kayenta II, a 28-megawatt addition. The entire Kayenta Solar facility, including Kayenta I and II, today produces a total of 53 megawatts of green energy - enough emission-free energy to serve approximately 36,000 homes. The renewable energy credits from this project help SRP in expanding its renewable-energy portfolio. 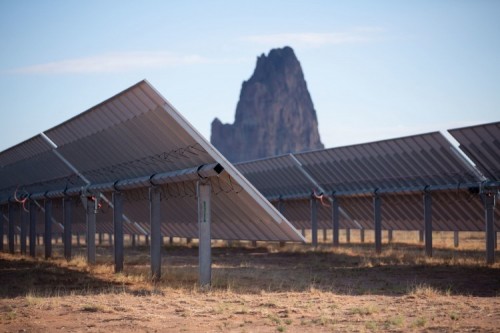 The Kayenta Solar facility serves as a platform for future ventures in which NTUA and SRP will work together toward the development of renewable energy projects within the Navajo Nation to further support the Nation's goal of charting their own energy future.

Through the partnership with NTUA, SRP will provide technical support in developing interconnection facilities for large-scale renewable development within the Navajo Nation, as well as provide procurement and financing expertise related to the development and ownership of such projects.

In addition, proceeds from the Kayenta projects and future renewable projects help fund electrification projects, including Light up the Navajo Nation, a joint program between NTUA and the American Public Power Association dedicated to extending electric power to homes on the Navajo Nation and creation of a better future for local communities.

Last spring SRP was one of 28 volunteer utilities that participated in the Light Up the Navajo Nation pilot project and has committed to participating once again in 2020. Through this effort, a total of 233 Native American families received electric service to their homes for the first time and the program expects to exceed that number in its second year.

"We have come a long way to bring power and light to the residents of the Navajo Nation," said NTUA General Manager Walter Haase. "This solar plant not only brings energy to the Nation but has been a catalyst to help us to improve the standard of living for many Navajo families."

SRP has been recognized by the NTUA as a cornerstone member of the Light up the Navajo Nation initiative through its partnership in securing solar power purchase agreements and providing ongoing support to NTUA in the development of renewable projects.

"We are proud to be able to continue to work with the Navajo Nation to bring diverse energy resources to their residents, and we look forward to continuing to work alongside NTUA and the Navajo Nation as we pursue new opportunities together through the Kayenta Solar Facility and other significant efforts," said Hank Courtright, Senior Director of Corporate Strategy, Planning and Innovation.

"The completion of the second phase of the Kayenta Solar project is another step in the Navajo Nation's movement toward becoming a leader in the renewable energy market. We commend NTUA and many others for their dedication in making this solar project a success. The Nez-Lizer Administration is committed to pursuing and prioritizing renewable energy development for the long-term benefit of the Navajo people," said Navajo Nation President Jonathan Nez.

In addition, the Navajo workforce was paid $4.3 million and received over 4,700 hours of specialized training in solar utility construction for the Kayenta Solar Project. The construction also generated $2.2 million in taxes paid to the Navajo Nation. Overall, it is estimated that $13.1 million in economic activity occurred within the surrounding communities during the construction period.

About NTUA: NTUA has continuously served the Navajo people for 58 years. The NTUA was established on January 22, 1959, to address the absence of utilities on the Navajo Nation, and NTUA has grown into a thriving tribally-owned enterprise delivering a portfolio of services. The NTUA is organized for the operation, maintenance and expansion of electric, communications, natural gas, water, wastewater and generation, including photovoltaic (solar) services for the Navajo people at a low and reasonable cost. Other objectives of the NTUA are to promote employment opportunities on the Navajo Nation, and to improve the health and welfare of the residents of the Navajo Nation and raising the standard of life in Navajoland.

About Salt River Project: SRP is a community-based, not-for-profit public power utility and the largest provider of electricity in the greater Phoenix metropolitan area, serving more than 1 million customers. SRP is the metropolitan area’s largest supplier of water, delivering about 800,000 acre-feet annually to municipal, urban and agricultural water users.