Boy to be Honorary “SRP Troubleshooter-for-A-Day” 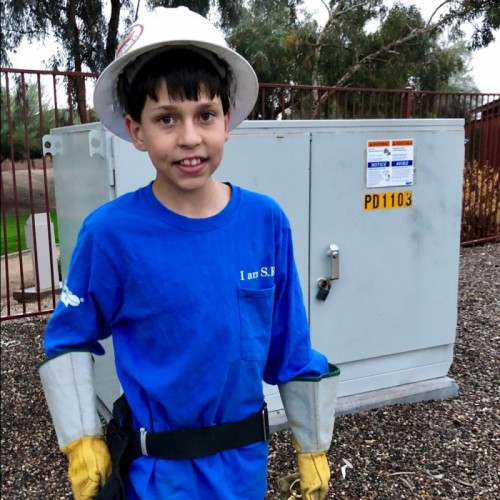 In late January, SRP’s Residential Contact Center received a phone call from a concerned 12-year-old boy who had spotted a fuse box with a broken lock in a neighborhood park.

Instead of ignoring what he perceived to be a hazardous situation, young Sandy placed an urgent call into SRP, which can be heard by clicking here. The community was never in danger, but SRP employees were impressed that the child had such a keen eye and concern for his community. Sandy said he wanted to call SRP because he “worried about a little kid getting in the box.”

As a result of his caring nature, SRP Troubleshooters are honoring the seventh-grade student — who attends Lauren’s Institute for Education for “differently abled children and adults” — by making him an honorary SRP troubleshooter for the day.

The recognition holds special meaning to Sandy because he has a deep interest in the utility industry. Thanks to YouTube and talking to any SRP employee he comes across, Sandy is very knowledgeable about all things SRP. Scott Billinger, the SRP Troubleshooter who responded to repair the broken lock, was immensely impressed by how much Sandy knew about his equipment, SRP’s distribution system and how inquisitive Sandy was as Billinger made the repair. Sandy even owns his own hard hat, tool bag and boots, as he hopes to one day become an electrical lineman.

In addition to this honor, SRP has also selected Sandy to throw out the first pitch at the Chicago Cubs spring training game on March 22 at 1 p.m. at Sloan Park in Mesa.

The SRP ceremony will be held on Wednesday, Feb. 27. 2 to 3 p.m. at SRP’s Tempe Service Center110 W. Elliot Road in Tempe (near Kyrene Road). Must provide ID to pass through security entrance.