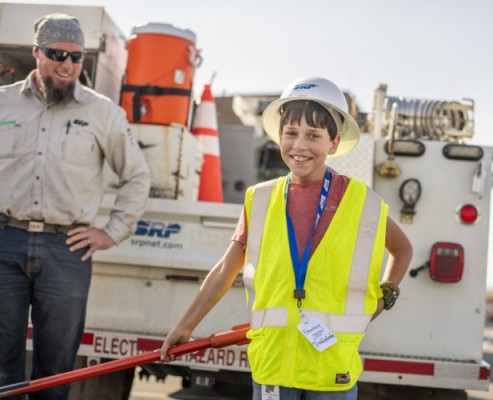 WHAT: One good deed and his caring nature are yielding memorable rewards for a 12-year-old Chandler boy with autism. In late January, SRP’s Residential Contact Center received a phone call from a concerned child who had spotted an electrical device with a broken lock in a neighborhood park.Instead of ignoring what he perceived to be a hazardous situation, young Sandy placed an urgent call into SRP. The community was never in danger, but SRP employees were impressed that the child had such a keen eye and concern. Sandy said he called SRP because he “worried about a little kid getting in the box.”

As a result of his caring nature, SRP troubleshooters honored the seventh-grade student — who attends Lauren’s Institute for Education for “differently abled children and adults” — by making him an honorary SRP troubleshooter for the day in late February. In addition, SRP also selected Sandy to throw out the first pitch at a Chicago Cubs spring training game.

Sandy possess deep interest and vast knowledge of the utility industry that he says he gained from watching SRP’s YouTube channel and talking to any SRP employee he comes across. Sandy dreams of one day working at SRP as an electrical lineman.

Scott Billinger, the SRP troubleshooter who responded to repair the broken lock, has forged a friendship with Sandy.

(Media credentials must be obtained, so please notify attendance in advance.)