As the largest provider of water to the greater Phoenix metropolitan area, Salt River Project is prepared and well situated to continue to provide the most precious resource to Valley residents well into the future. In fact, the Salt and Verde River system is expected to be less impacted by climate change and thus more resilient.

Not only have water conservation and efficient water delivery practices reduced the use of water in the Valley over the last 30 years despite booming growth that has made the Phoenix area the nation’s fifth-largest metropolis, but new research shows that there will be an adequate amount of water and room for growth even with a changing climate. 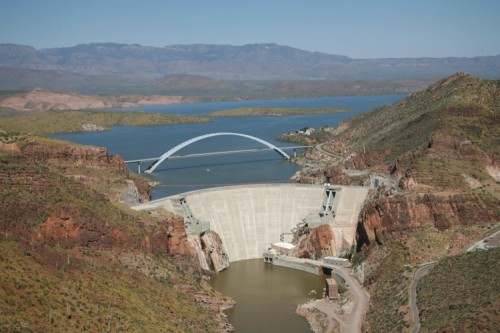 “The Valley has a diverse supply of water unlike any other community in the Southwest, including surface water from our lakes and rivers, groundwater SRP can pump, water stored underground in basins for future pumping, water from the Colorado River that is delivered in the Central Arizona Project canal and reclaimed wastewater,” said Dave Roberts, SRP’s associate general manager and chief water resources executive.

Looking ahead, Roberts said SRP is working with partners to address and prepare for climate change. Some of the key findings are:

• Research shows SRP’s water system is less sensitive to climate change. Recent research suggests that the Salt River system is less sensitive to a warming climate. This finding is supported in research done at the university level by Arizona State University and the University of Arizona, as well as other research institutions (e.g., Agricultural Research Service-U.S. Department of Agriculture and The Nature Conservancy). The U.S. Bureau of Reclamation has recently published similar research results. Runoff from winter precipitation on the Salt River system occurs in the late winter/early spring when sun angles are lower and temperatures are not as warm compared to the upper Colorado River Basin, which experiences runoff much later in the year when sun angles are higher and temperatures are warmer. Consequently, reductions in streamflow to the SRP water supplies are expected to be much less compared to the upper Colorado River system.

• Despite being less sensitive, SRP continues to prepare for climate change. SRP has maintained a sustainable, reliable and affordable supply of water through strategic resource planning. SRP’s water-delivery system is very efficient and very little water is wasted. The efficiency in which SRP delivers water is one of the highest in the nation. More than 96 percent of the water SRP diverts at Granite Reef Dam and from its service area well system makes it to its water customers, which far exceeds the state water-delivery, efficiency requirements.

• Recent and expected future decreases in water use can offset the effects of warming. While the state’s population has more than doubled since 1980, total water use has decreased by a third due, in large part, to widespread and robust water conservation efforts adopted by valley citizens. SRP educates its customers on how to save water through srpnet.com/water; partnerships with cities at wateruseitwisely.com, events such as the Water Expo and Canal Convergence; social media and an education and awareness campaign through various media channels to focus on the importance of water conservation. Another reason is the continued transition of farmland to urbanized land resulting in decreased water use in the Valley.

“The bottom line is that the current state of research suggests that the Salt River system, unlike the Colorado River system, is expected to be impacted by climate change differently,” said Roberts. “And, as we have done for more than 100 years, SRP will continue to plan and execute strategies for building resilience in the Salt River and Verde River water supplies we manage for the Phoenix area –even in the face of a changing climate.”

Each year, SRP assesses the adequacy of its reservoir water supply and only allocates a certain amount of surface water to ensure that sufficient supplies are carried over for use in subsequent years. SRP’s careful water planning has served the Valley for more than 100 years with a portfolio of water supplies that is resilient and can make up the shortfall when winter runoff is below normal, Roberts said. In addition to supplies from the Salt and Verde reservoirs, SRP draws on groundwater pumped from 270 wells in the Valley to supplement surface water supplies.