"Sandy is one of the most special kids I have ever met. He's full of life and fun to be around. He's going to be a future troubleshooter for sure." 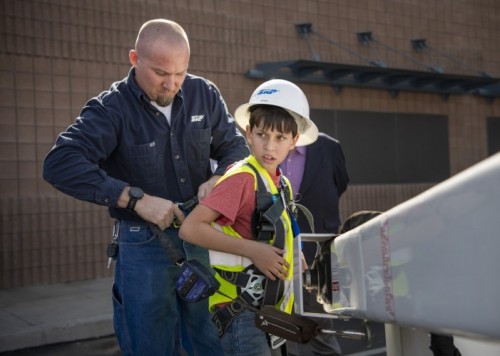 Days can tend to run together when you've been on the job for more than five years, but for SRP Troubleshooter Scott Billinger, Jan. 19 was a day unlike any he's encountered. It started with a sweet but urgent phone call into the Residential Contact Center from a 12-year-old boy with autism.

Sandy Budd — who attends Lauren's Institute for Education for "differently abled children and adults" — spotted a lock missing from a primary wire-pulling enclosure in a neighborhood park, but instead of moving on to play on the jungle gym at Tumbleweed Park in Chandler, the seventh-grader called SRP to report the problem.

When Billinger pulled up to the park, he saw a little boy standing on the curb. His routine trouble call immediately became quite exceptional.

"He was standing by the side of the road waiting for me," Billinger explained. "He saw me way before I saw him, because he was waving at me. That's when I remembered the work order said they thought it was a child who called in."

The child Billinger encountered was wise beyond his years in knowledge about SRP's distribution system and the tools linemen use to do their jobs. As Billinger worked, Sandy watched, talked and asked question after question.

"He explained to me how much he knew about line work. It was fascinating because you don't see too many people out there who know the ins and outs of our job," Billinger said. "When I got back to the yard, I had to tell everyone about it."

Sandy can name most of the tools and equipment that linemen use and can explain exactly how the SRP three-phase pad-mounted transformer by his home is constructed. His grandpa, who raises him, said that anytime Sandy sees someone who works for SRP, he stops to talk and usually has a million questions — most he already knows the answers to.

Through the years, Sandy has amassed quite a collection of SRP gear — which he loves to wear — given to him by the employees he stops to get to know. Sandy has dreamed of working for SRP and being an electrical lineman for as long as he can remember or "since he could walk," according to his grandpa.

After meeting Sandy on Jan. 19, Billinger knew he had to do something special for him. On Feb. 27, SRP Troubleshooting made Sandy an honorary troubleshooter during a special ceremony at Tempe Service Center.

Sandy and his family were given a tour of the SRP Troubleshooting office. Sandy experienced being harnessed in a bucket truck and going up a few feet. He also went on a short and safe ride-along with his new buddy, Billinger. Manager Jeff Gauman even assigned Sandy his own troubleshooter call number: 119, the date Sandy called in to SRP.

"We wanted to do something extra special for Sandy to thank him for his keen observation skills and notifying SRP," Gauman said. "The community was never in danger, but we were so impressed that a child had such a keen eye and concern for his community."

Billinger added, "Sandy is one of the most special kids I have ever met. He's full of life and fun to be around. He's going to be a future troubleshooter for sure."