The Sonoran Energy Center will be the largest solar-charged battery project in the state and with the addition of these two plants will make SRP one of the largest investors in energy storage in the nation.

Combined, these plants will generate enough solar energy to power approximately 100,000 homes and will store excess energy in state-of-the-art battery storage systems that will be available to customers during the peak energy usage period when demand is at its highest.

The solar plants will also contribute to the SRP goal of adding 1,000 megawatts of new utility-scale, solar energy to its system by the end of fiscal year 2025 as well as SRP’s 2035 goal to reduce the amount of carbon emissions per megawatt-hour by more than 60 percent and by 90 percent in 2050. 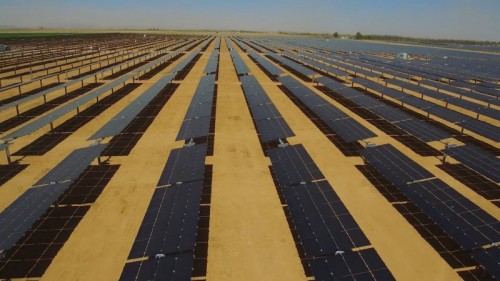 With the closing of the Navajo Generating Station, the utility is well on its way to achieving these goals while continuing to aggressively pursuing renewable generation.

Sonoran Energy Center will be an approximately 250-megawatt system with the solar array charging a 1 gigawatt-hour energy storage system and will be built in Little Rainbow Valley, south of Buckeye.

The Storey Energy Center will be an approximately 88-megawatt solar and energy storage system and is scheduled to be built south of Coolidge.

“These integrated solar and storage plants will allow SRP to meet its summer peak demand, reduce carbon emissions, and provide clean energy to our customers while optimizing energy output using state-of-the-art battery technology,” said SRP General Manager and Chief Executive Officer Mike Hummel. “In addition, these plants will get SRP more than 60 percent toward our goal of adding 1,000 megawatts of new utility-scale, solar energy to its system by the end of fiscal year 2025.”

The projects were chosen as the result of an open “All-Source” solicitation for resources and will help serve SRP’s summer peak load. Both plants are scheduled to be online by June 2023 and will be owned and operated by subsidiaries of NextEra Energy Resources, LLC.

“We are pleased to help SRP serve its customers with more clean, affordable, renewable energy, combined with the flexibility of battery energy storage systems,” said Matt Handel, vice president of development for NextEra Energy Resources, the world’s largest generator of renewable energy. “These projects will also provide a significant economic boost for their local communities and for Arizona, including good jobs and millions of dollars in additional tax revenue.”