SRP to Begin River Swap from Verde to Salt System

Salt River Project this week will begin a partial summer river swap operation, with water releases ramping down on the Verde River system while gradually increasing from Stewart Mountain Dam on the Salt River starting Tuesday.

Residents using the lower Salt River for recreational purposes should be aware of the increased flows. Between Tuesday and Friday, water releases along the lower Salt River will gradually increase out of Stewart Mountain Dam from 8 cubic feet per second (cfs) to 500 cfs. Releases from Bartlett Dam on the Verde River will be set to meet remaining SRP shareholder demand. 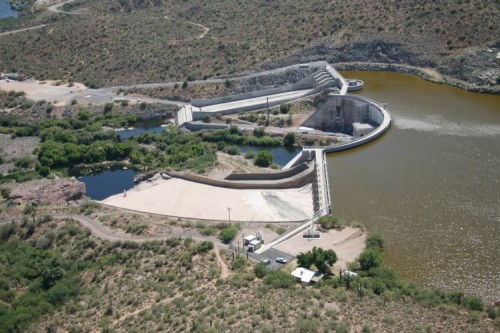 Charlie Ester, SRP’s manager of Surface Water Resources, said the Stewart Mountain Dam releases this week are being made to facilitate effective increased summer water deliveries. Having some of the water demand come from Saguaro Lake on the Salt River allows SRP to more efficiently meet the daily fluctuations of summer water demand. Once Horseshoe Lake has been drawn down to meet the requirements of the Verde River Habitat Conservation Plan, the flow from Bartlett Dam will be reduced – likely in early July -- and then nearly the entire water order will come from Stewart Mountain Dam.

The productive 2019 runoff season has brought more than 1 million acre-feet of inflow into the Salt and Verde reservoirs this year, raising the combined reservoir storage to 81 percent of capacity compared to 58 percent one year ago. The partial summer river swap – or switchover -- will allow continued use of water to meet SRP demand from the 85-percent full Verde reservoir system to continue drawing down levels at Horseshoe Lake while allowing for operational flexibility to meet higher summer water demand from the Salt River through June.

This winter has been the most productive for SRP since 2017 -- when runoff between January and May was just under 1 million acre-feet – and the six Salt and Verde reservoirs are currently at their highest elevation in almost a decade. Including this winter’s inflow from snowmelt and precipitation on the 13,000- square-mile Salt and Verde watershed, two of the last three runoff seasons have been well-above normal while 2018 was the driest on record with just 100,000 acre-feet of runoff.

No water was released this winter from the Salt River reservoirs at Granite Reef Diversion Dam because of the much larger available capacity at Theodore Roosevelt Lake, which holds about 70 percent of the water SRP stores. Roosevelt has risen to 76 percent – up from 39 percent on Dec. 15 -- and will continue to climb with considerable available space to contain expected seasonal runoff through the end of May.

Water releases from Horseshoe and Bartlett reservoirs on the Verde River were initiated in late February at Granite Reef Diversion Dam to create additional storage capacity and provide maximum flexibility for snowmelt and the likelihood of future runoff events in the spring. Most of that water released into the Salt through the Phoenix metropolitan area has helped recharged the aquifer, Ester said.

SRP discontinued spilling water from the Granite Reef Diversion Dam into the normally dry Salt River on April 1. Since SRP began low-level water releases on Feb. 28, more than 100,000 acre-feet of Verde River water was spilled into the Salt River through the Valley – about the same as in 2017.

SRP this week begins a partial summer river swap with water releases switching from the Verde to the Salt. Those using the lower Salt River for recreational purposes should be aware of the increased flows.