We can coordinate an interview with an SRP official at the SmokeD test site in Mesa. Please call (602) 236-2500 to arrange an interview.

Salt River Project is piloting a Smoke Detector Pilot Project that will act as a camera and smoke detector and provide an early-warning system for wildfires that occur near the utility’s transmission line towers in the Tonto and Apache-Sitgreaves national forests. The groundbreaking project, which could have an impact on wildfire preparedness and protecting a portion of the Valley’s watershed, is the first of its kind in Arizona.

The smoke detectors and cameras, which have been used in California and Europe, will capture physical changes on the utility’s 500-kilovolt (kV), transmission towers that transmit energy to the Valley from power plants located in eastern Arizona. 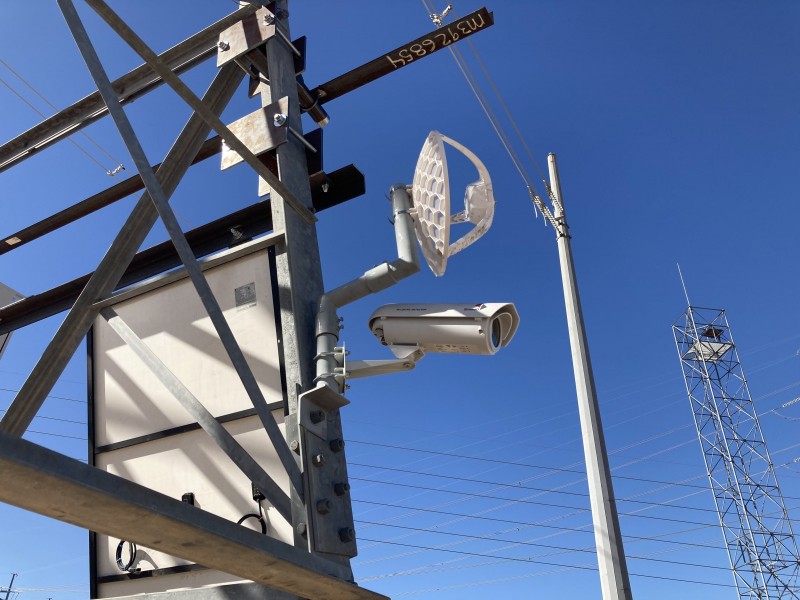 About 120 miles of SRP’s high-voltage power lines are located on forest service land located in the northeastern part of the state, and 2021 was a record-breaking year for forest fires. This year looks to be just as impactful.

SRP provides power to more than 1.1 million Valley residents, part of which is delivered on high-voltage transmission lines in this area. SRP also manages the water supply for much of the Valley – most of which comes from 8.3 million acres of forested land threatened by these fires in northern Arizona.

SRP is setting up two test areas with 12 cameras to capture images of a portion of the 500-kv transmission towers every 10 minutes. The solar-powered infrared cameras can work at night and capture images up to 10 miles out with a 360-degree view.

Through Artificial Intelligence, the cameras have the ability to learn surrounding environment, report changes and provide alerts when identifying smoke from wildfires or changes to structures. Cameras can also alert SRP to issues such as downed lines, downed towers or damaged equipment.

“Today, if a fire impacts our lines, we may not know until we get an alert that something has interrupted the delivery of power. Our crews could be up to 200 miles away and have no visuals to determine what is happening,” said Floyd Hardin, SRP Fire Management Officer . “With this tool, we have the potential to see images nearly in real-time and can determine our next steps quickly and efficiently.”

One section of smoke cameras will be on the north side of 260 northwest of Forest Lakes. The other section will be located about eight miles south of 260 on Young Road. If this pilot program works, there could be eyes on the high-fire-risk area and SRP’s critical structures, 24/7, year-round.

“Power companies are forced to deal with multiple, fire-related issues. Beyond dealing with wildfires, it is not uncommon for a failure of a power line to lead to a fire,” said Artur Matuszczak, CEO of SmokeD. “Thanks to our partnership with Salt River Project, we can prove that fire detectors can also be installed on utility structures. As an additional benefit, the company receives a tool that monitors their infrastructure.”

SRP crews are currently mounting the cameras at a test site in the East Valley.  The goal for pilot program is to be operational by late summer.