SRP Celebrates the 25th Anniversary of the Modifications to Roosevelt Dam

This month marks the 25th anniversary of the raising of Roosevelt Dam, a $430 million water infrastructure project that raised the height of the dam by 77 feet, more than doubling the lake's capacity and creating additional water supplies to serve more than 850,000 households per year.

As SRP celebrates the anniversary of the improvements made to Roosevelt Dam, the public power utility and water provider is also celebrating the partnerships with local and federal agencies that helped make this project a reality. SRP worked with the Bureau of Reclamation, the U.S. Army Corps of Engineers, the Maricopa County Flood Control District and the cities of Mesa, Chandler, Tempe, Phoenix, 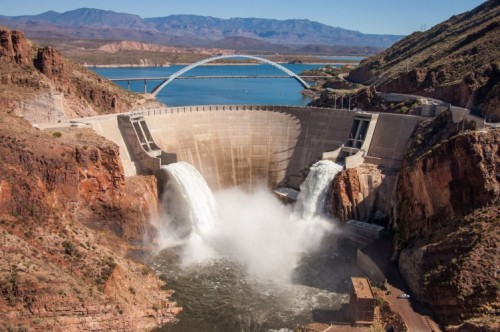 Scottsdale and Glendale to fund and implement the modifications at Roosevelt Dam.

The investment by the cities made it possible to store additional water for use in their communities, while investments by the federal government and flood control district helped ensure that the dam could protect downstream communities from the flood-prone Salt River. The modified Theodore Roosevelt Dam allows partners to store more renewable surface water during the years with high precipitation and helps offset SRP and partner groundwater pumping to preserve aquifers.

“Building Roosevelt Dam and then later increasing its height to ensure safety and allow for more storage capacity has provided the Valley with safe and reliable water through dry and wet periods.” said Dave Roberts, SRP associate general manager for Water Resources. “This important infrastructure investment is an example of the type of water infrastructure investments that will prepare SRP to serve the Valley for the next 100 years, especially as we prepare for the impacts of climate change.”

As part of a continuing strategy to strengthen SRP’s water resiliency, the utility is working with Reclamation, the U.S. Army Corps of Engineers and other partners to evaluate options to improve the operational flexibility available in the Roosevelt Dam flood control space.

This would allow SRP and its partners more time during the runoff season to put the water to beneficial use or to store it underground for later use. It would also provide an opportunity to improve the water security of communities in Central Arizona that face potential future shortfalls based on expected demands or available supplies, such as those affected by shortage on the Colorado River.

“This new proposed project will play a critical role as we continue to prepare our infrastructure and operations for the future while also creating opportunities to help sustainably meet the water needs of Central Arizona,” Roberts said.

Armed with research and input from stakeholders and partnering with federal agencies and other agencies, SRP will continue to invest in its infrastructure to help improve the management Arizona’s most precious resource.

“Throughout its storied history, Roosevelt Dam has contributed more than any other dam in Central Arizona to the growth of the Phoenix metropolitan area and continues to provide the valley with a stable and consistent water supply,” said Leslie Meyers, Area Manager of Reclamation’s Phoenix Area Office. “The modifications we celebrate today only increased the value of the water supply and flood control benefits that Roosevelt Dam provides.”

"Chandler has worked hard and made the necessary investments to acquire a diversified water supply to support future growth and prosperity of the City," said Chandler Mayor Kevin Hartke. "Chandler's investment in New Conservation Storage water made possible by modifications of Roosevelt Dam has enabled, and continues to enable, Chandler to grow smartly while planning for the future."

“Glendale actually means fertile valley and without SRP’s constant planning, Glendale would not have been able to enjoy our rich agriculture history nor would we have the water available today to enjoy success in economic development and housing growth,” said Glendale Mayor Jerry Weiers.

“The Roosevelt Dam modification was an exemplary infrastructure project that the City of Mesa was pleased to have been a part of,” said Mesa Mayor John Giles. “The project has had a significant impact on the management of Salt River, and continues to provide resiliency to Mesa and to the water supplies in cities across the Valley.”

“It is imperative that we continue to invest in water infrastructure improvements and development. The construction and subsequent modification of Roosevelt Dam is the heart of Phoenix’s water portfolio,” said Phoenix Mayor Kate Gallego. “We are proud of our partnership with SRP, the Bureau of Reclamation, and other Valley cities in the modification of Roosevelt Dam. It demonstrates our commitment to continuous innovation for the future and makes it possible to provide this vital resource to our communities.”

“Salt River Project has always been an essential component of the city of Scottsdale water portfolio,” Scottsdale Mayor David Ortega said. “Foresight in planning, building and stewardship of the expanded NCS capacity at Roosevelt Dam are crucial to its 100-year assured water supply designation. As Mayor of Scottsdale and on behalf of my community, we appreciate the excellent management of this most important resource.”

“Tempe is grateful to have SRP as a partner in water delivery. The Roosevelt Dam extension was and is cause for celebration as a great example of partnership and jointly investing in water security,” said Tempe Mayor Corey Woods. “Tempe is proud of our commitment to climate action and resiliency in water resources, as both are critical to sustainably meeting the needs of our growing community. We look forward to partnering with SRP and our neighboring cities on drought resilience and sustainability for years to come.”

This month marks the 25th anniversary of the raising of Roosevelt Dam, a $430 million water infrastructure project that raised the height of the dam by 77 feet which more than doubled the lake's capacity and provided additional water supplies to more 850,000 households per year.