As a result of several storms that have hit the Salt and Verde river watersheds recently, the Salt River Project has begun releasing water from its two reservoirs on the Verde River to create additional storage capacity and provide operational flexibility to accommodate the increased runoff coming into the reservoirs. March 2020 is now the wettest March on the Salt and Verde watershed since 1992.

Today’s water release from Granite Reef Dam, which is located southwest of the confluence of the Salt and Verde Rivers near Mesa, will increase from just over 400 cubic feet per second (cfs) to more than 3,000 cfs this morning. The water is expected to reach the unbridged Salt River crossings at Gilbert and McKellips roads by Saturday and will lead to road closures over the weekend. Flows at Granite Reef will fluctuate as SRP manages the inflow to the reservoirs. 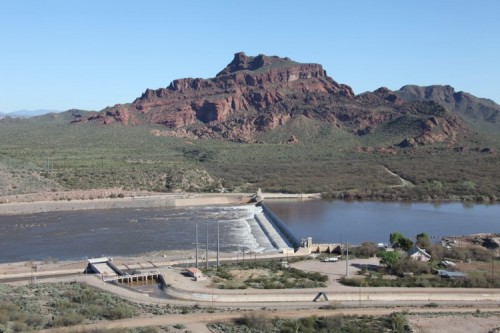 SRP has notified Valley law enforcement agencies of the water releases and the potential that the water releases could continue for some time as snowmelt adds to runoff reaching the reservoirs. Local residents are urged to not recreate in or near the Salt River bed and avoid flooded, low-flow crossings as these releases can be extremely hazardous with strong and debris-filled currents.

Significant rain and high elevation snowfall this past fall and winter has created nearly perfect conditions for the watershed to generate abundant runoff. The unusually wet storms this month have resulted in sufficient runoff to fill the Verde reservoirs to near capacity necessitating spill releases to make room for additional runoff.

Bartlett Lake, the larger of the two Verde River reservoirs, and Horseshoe Lake will soon be reaching capacity with only about 5,000 acre-feet of available storage space between the two lakes on Friday morning.

Today, the combined Salt and Verde system is at 94 percent of capacity, up from 75 percent one year ago. The Salt River system is 93 percent full. Theodore Roosevelt Lake, which holds about two-thirds of the water SRP stores, is at 92 percent capacity. Roosevelt Lake is also expected to fill later this spring. The last time the Salt River Reservoir system filled to capacity was a decade ago when 1,430,000 acre feet of water flowed into the reservoirs.

SRP’s current streamflow forecast is projecting the 2020 runoff season to produce 875,000 acre-feet of water. Three of the past four winters have experienced wet winters that produced above median inflows including 2017 and 2019, when nearly 1 million acre-feet of runoff flowed into the Salt and Verde reservoirs.

SRP is a community-based, not-for-profit public power utility and the largest provider of electricity in the greater Phoenix metropolitan area, serving more than 1 million customers. SRP is the largest raw water supplier in the greater Phoenix metropolitan area, delivering about 750,000 acre-feet of water annually to agricultural, urban and municipal water users.