I’m very proud of the 131 Team. Although, some members were unable to complete all 131 miles this time around, they were very supportive along the way and were our biggest cheerleaders. This goal wasn’t only about walking/biking 131 miles along SRP’s canals, it was about connecting office staff with field employees to learn and educate each other about SRP’s irrigation systems and our customer needs, and we did just that.

To schedule an interview with an SRP canal walker, contact Kathleen at (602) 236-2585 or Kathleen.mascarenas@srpnet.com.
For downloadable photos scroll down.

At times it seemed impossible, especially when the entire world paused due to COVID-19, but five SRP employees stuck to their 2020 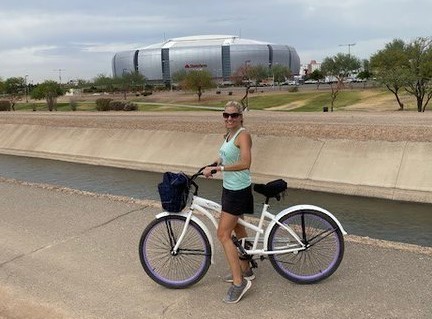 New Year’s resolution to get fit and conquer 131 miles of Salt River Project’s canal system in 365 days. The team had the canal system mapped out to complete its mission by December 2020.

Last January, employees from Salt River Project’s Southside Water group formed a group called “131 Can Be Done.” The challenge: walk, run or cycle the 131 miles of SRP’s canal system by year’s end. The idea started as a way for employees to get fit and educated about SRP canals and the way water is delivered to the valley. Five of the original 23 team members completed the 131 miles.

“Before the pandemic, we had a team of 23. We coordinated weekly walks and completed about 21 miles together. As a team, it was a great opportunity to learn about SRP’s irrigation while exercising. Once COVID-19 hit in mid-March, we stopped and waited for it to pass. Like everyone else, we had no idea the pandemic would last more than a couple months,” explained Lynn Allen, organizer and manager of SRP’s Water Contact Center. “In late September, we decided to continue our 131 goal, but individually instead of as a team. It was unfortunate we couldn’t continue to ride and bike together, but a few of us still accomplished the goal and encouraged each other along the way, virtually.”

The banks of SRP-operated canals have always been popular recreation areas and SRP saw a marked increase in usage during the pandemic. For Allen, it was an eye-opening experience.

“I live on the east side of town and I had no idea how far west and north the SRP canals stretch across the valley,” said Allen. “I joined SRP’s Water Delivery group about 13 months ago and walking and biking the canals helped me better understand SRP’s irrigation service territory. It gave me perspective on what goes on with our field crews after SRP water customers place water orders with those of us in the contact center.”

“I thought it was very interesting how each city works around the canal system and paths,” said Brian Allen, SRP Supervisor of Revenue Protection. “Some cities have really embraced the canals and created beautiful art displays and pathways to encourage bike and pedestrian usage.”

"I’m very proud of the 131 Team,” Allen said. “Although, some members were unable to complete all 131 miles this time around, they were very supportive along the way and were our biggest cheerleaders. This goal wasn’t only about walking/biking 131 miles along SRP’s canals, it was about connecting office staff with field employees to learn and educate each other about SRP’s irrigation systems and our customer needs, and we did just that.”

“There are many beautiful paths along the canals, but there are also paths that are isolated in remote areas that may or may not be paved. I 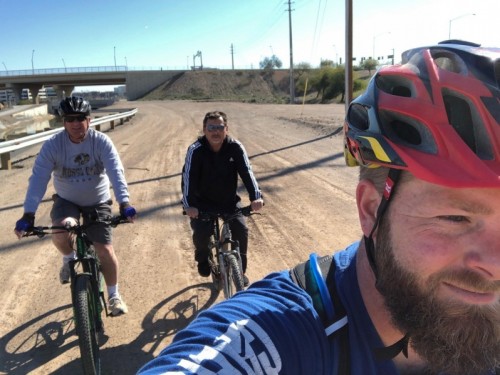 highly recommend you walk/bike with a buddy, bring plenty of water and make sure you have the right type of bike, tools and shoes for each canal path.” – Lynn Allen

“I would recommend a mountain bike over a beach cruiser since the canal paths often going back and forth from pavement to dirt. Also, be prepared. It’s smart to have a few tubes in case you get a flat tire and a wrench to tighten loose handlebars.” - Brian Allen

“Enjoy your time on the canal. Take in the views around you such as pecan trees that line the canals in certain areas. It’s really quite beautiful, if you stop to enjoy some of the locations.” - Josh Murray