Latest Milestone in Decommissioning of the Huge Coal-Fired Power Plant

Each of the massive 20,000-ton boilers and support structures rolled to the ground east of the power plant in just 10 seconds following detonation. The boiler demolition is part of SRP’s continuing decommissioning of the nearly 50-year old coal-fired power plant that ceased operation on Nov. 18, 2019.

Val Whitehorse, O&M supervisor who has worked at NGS since January 2006, was selected to detonate the charge.

“It’s bittersweet because of the personal experience working here,” he said. “I grew up with this plant. My late, retired father (Earl Whitehorse) worked here before me. It’s comparable to detonating and demolishing one of the monuments around here like Tower Butte. NGS has been an iconic symbol for more than 45 years.”

In terms of scale, this demolition was significantly larger than the three electro-static precipitators, which were imploded on Dec. 18 and Jan. 19, and used significantly more explosive than was used to fell the three 775-foot stacks on Dec. 18.

“After more than 40 years of reliably converting water into very high-pressure steam for power generation, three of the largest boilers in the country have been laid to rest,” said Gary Barras, SRP Director of Major Projects. “I very much appreciate the dedicated efforts of our entire NGS decommissioning team, including SRP personnel, Tetra Tech, Independence Excavating and Demtech, who all contributed to the safe demolition of these massive structures.”

This was the most complex demolition so far because of the amount and mass of the steel in the boilers, support columns and hanger beams – a combined weight of 65,000 tons. It required six weeks to make more than 900 torch cuts on structural columns in each boiler and well over 10,000 cuts on pipes, non-structural members, separations and other equipment to allow the structures to fall where intended.

Doug Thomas, Independence Excavating senior project manager, rated the magnitude of this demolition as one of his company’s biggest.

“Every blast is unique and each has its own level of critical and technical concerns,” he said. “By sheer scale, this is in the category of the IX’s larger blasts.”

Thomas Greiwe, president of blasting subcontractor Demtech, said 540 pounds of linear-shaped charges were used to cut through steel support beams, some five inches thick, and 480 pounds of dynamite kicked them out of the way so the boilers fell precisely where planned.

The boilers’ many miles of water wall tubes made up the exterior walls of the furnace box and extended the entire height of the boiler walls. With the exception of the supporting beams and sheet metal skin, the entirety of each boiler was comprised of many banks of water wall, superheated and reheater tubes.

Within each boiler were the huge, roiling, blindingly yellow fireballs. These were continuously fed by baby powder-fine injections of coal that ignited instantly like gasoline. The fireballs heated super-purified water within thousands of tubes to 1,005 degrees. This created an invisible, waterless steam – or “weam,” as operators called it – that turned the hundreds of massive turbine blades to create electricity.

“For the last 15 years of my career at NGS, I oversaw the coal handling system from when it was unloaded until it was blown into the boilers,” said Lemuel Brown, SRP’s field decommissioning manager. “To get a picture of the size of each of these boilers when inside, it was close to a regular full-size basketball court and about 180 feet tall. I think of all the times we had to get inside to find a leak and do the repairs as safe and efficiently as we could. Sometimes I told my wife what we did. She’d cringe and say, ‘Are you crazy or what?’”

Dust from the demolition was controlled by water sprayed and misted from “dust bosses,” also known as water cannons.

Once the boiler debris is cleared away, next to be demolished will be the three-unit NGS turbine block where electricity was made. 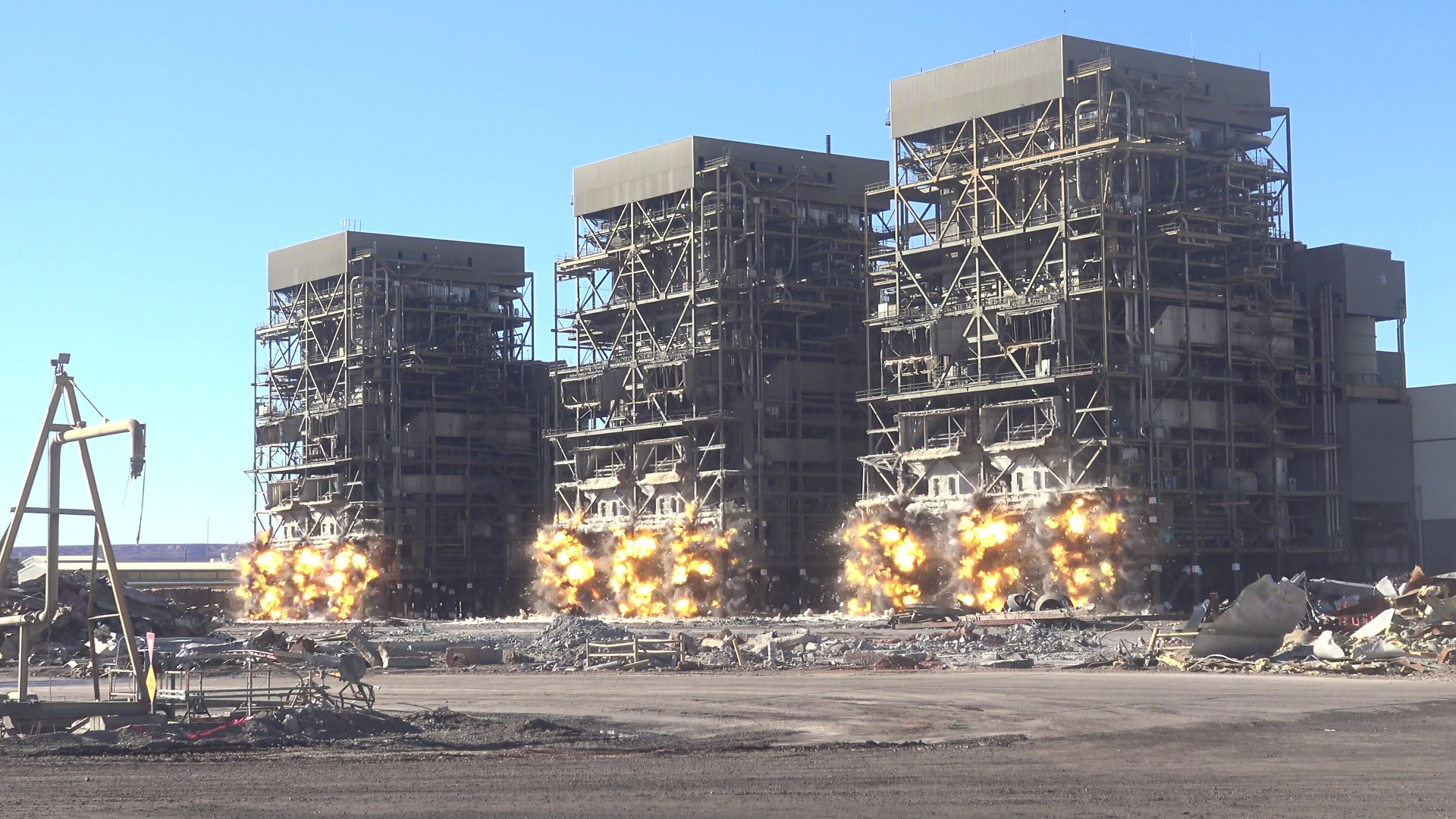